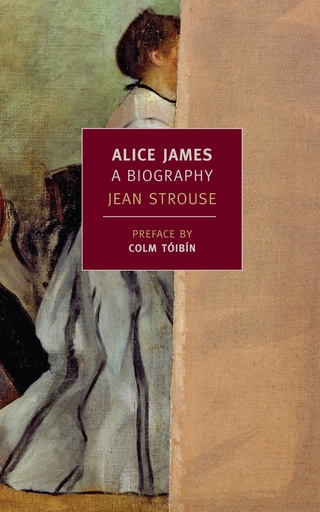 Winner of The Bancroft Prize—now available in a new edition from New York Review Books.

The Jameses are perhaps the most extraordinary and distinguished family in American intellectual life. Henry’s novels, celebrated as among the finest in the language, and William’s groundbreaking philosophical and psychological works have won these brothers a permanent place at the center of the nation’s cultural firmament. Less well known is their enigmatic younger sister, Alice. But as Jean Strouse’s generous, probing, and deeply sympathetic biography shows, Alice James was a fascinating and exceptional figure in her own right. Tormented throughout her short life by an array of nervous disorders, constrained by social convention and internal conflict from achieving the worldly success she desired, Alice was nonetheless a vivid, witty writer, an acute social observer, and as alert, inquiring, and engaging a person as her two famous brothers. “The moral and philosophical questions that Henry wrote up as fiction and William as science,” writes Strouse, “Alice simply lived.”

"From an isolated, eventless existence, Jean Strouse extracts something that did not exist for centuries: a woman’s interior life." —Stacy Schiff, Wall Street Journal

"Jean Strouse’s biography of this infantilized, untimely, brilliant, radical, wasted, proud, hysterical woman does her complexity justice. Without didacticism or polemic, Strouse squarely confronts and explores the broad issues of medical and intellectual history that Alice James’ life raises so provocatively. Her book is searching and scholarly, fascinating and sound." —Boston Globe

"Miss Strouse, in acquainting us with the younger sister of William and Henry James, has, as it were—and she is witty about Henry’s ”ineluctable ‘as it weres’—written a Jamesian novel, subtle, evasive, embroidered, splendid…. Miss Strouse, who weaves instead of hammering home her delicate points is as expert in literary criticism as she is in recreating family life, medicine, psychology and education in 19th-century America." —John Leonard, New York Times

"This is an important book for those interested in women’s history, in literary biography and for those who want to gain insight into the inner workings of human beings." —Christian Science Monitor

"Brilliant... Jean Strouse has created a fascinating picture of 'woman's place' in a family of genius, and throws a searching light on the price a woman sometimes pays when reared in such a hothouse." —Leon Edel

"An honor in every way to the difficult, elusive, and inimitable Alice James." —Elizabeth Hardwick

Alice James, A Biography
"A triumph of exact compassion, of disciplined speculation, and of imaginative justice."
—Christopher Ricks, Sunday Times